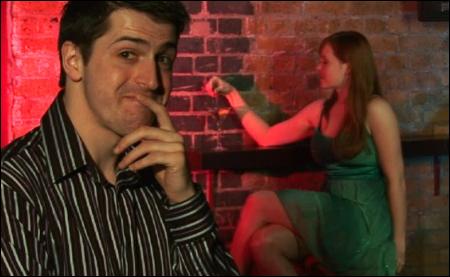 What do you say when you see a girl you’re attracted to?

You spot a black-haired bombshell sitting at a table in a coffee shop on a busy downtown corner, her attention is focused anywhere but in your direction. You would get up to talk to her but first you have to engineer the perfect thing to say. So what is it?

What you say after your first few words is far more important to the success of the conversation, though. An opener is just a tool to get her attention, but those next few sentences will have a large influence on whether you are able to have a conversation with her or whether she will shut you down and withdraw her attention. Start with anything – it doesn’t matter what she says next. How you respond to her response will say a lot about your character, whether you are skilled with women, and if you’re used to the ritual games they play with the guys who approach them. Look at any negative response from her as a test she is giving you to find out if you are a cool, confident guy. Ignore her icy stare, put on a warm smile and push on, brave soldier.

What you say next is also vital for setting the course of the interaction. Try to seek rapport right away and she may see you as either someone just trying to make friendly conversation or another loser guy who wants to get in her pants but doesn’t know how. Say something funny instead, and you might just grab her attention and hold it for a few moments longer. Continue with a fun conversation and you’ll give yourself the opportunity to build rapport later and start the relationship you want to have with her.

I usually start a conversation with the word “hi”. That may seem too simple if you’re just beginning to approach girls. I had that exact same thought before I started using it, but since the first thing you say never really matters I never have to think about what to say before I walk up to a woman. Of course, their response will vary widely. Sometimes she’ll look up at me with a huge smile and start talking to me. This outcome is both fantastic and rare. At other times, she’ll look annoyed and try to ignore my advance, but most of the time her response falls somewhere in between these two extremes. I’ll follow up by asking her where she’s from, which is usually amusing and surprising since almost all of the women in Korea are Korean. Having sparked her interest, I can follow up with more humour and take the conversation where I want to take it. No interaction I have rests on my ability to come up with the perfect thing to say initially.

If you’re just starting to talk to women, adopt an easy and simple opening line that you can use in almost any situation, then focus on finding humorous observations you can make after she responds. Your success rate will be a lot better because ultimately it’s not what you start with but what you follow up with that will have the biggest influence on the interaction.