A friend of mine was on a date not so long ago with a girl he had been seeing for a few weeks. As far as he could tell things had been going decently between them, all signs pointed to yes.

As they were making their way through the microbrewery he noticed that her mood had shifted from the start of the afternoon – she was getting more and more irritated. Nearing the end of the tour, he asked her what she wanted to do next. She looked up at him with cold eyes then snapped at him.

Later that night over Skype he started complaining that he just didn’t know what had happened. He had done everything he thought he should, but she just kept getting more and more pissed off. 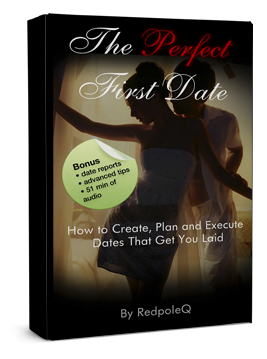 respected at home and in the workplace, they can hold positions of power, and they even have nearly the same economic opportunities as men do in the West. Along with this increase in equality has come a blurring of social roles, however, with men often left scratching their head when it comes to figuring out exactly what woman want from them.

This is no different when it comes to dating. If you take a look back 50 years ago you’ll see clear cut social roles that men and woman had to play when it came to courtship – chivalry being the main underlying theme. As a man you were expected to take her coat, to carry her books, to open doors for her, to pay for everything, and to bring her flowers (or his high school jersey) as a token of affection. Girls, in turn, were supposed to play hard to get while still following the guy’s lead. They were supposed to put up resistance towards anything mildly sexual but keep from taking an active role on how the night went.

A lot has changed in 50 years. These days, only shmucks bring girls flowers unless it’s a special occasion, and women often insist on paying their fair share. With the degree of change over the last 50 years, and the often conflicting messages about what woman want, guys can be forgiven for being clueless when it comes to proper dating.

My friend had made a good effort to include his date in the decision making process that night. They had agreed together about the time they would meet that afternoon, and where to have lunch. He had made sure to include her when deciding to visit the microbrewery, and was doing his best to include her in what they would do next. All this irritated her more and more.

While a lot of chivalry has been called into question by modern women, some of its key tenants still survive and are critical to having the best possible date. One of those tenants is the idea of leadership – as a guy, it is your responsibility to plan any date that takes place, to take a woman and lead her on a shared journey. It’s your responsibility to make all of the decisions about what that journey will consist of, and where it will end up. It’s the woman’s job to follow you, assess you, and either allow the interaction to go forward or not.

A lot of guys don’t understand this. Women expect men to lead, in the majority of cases. In my friend’s case, by getting upset, his date was desperately trying to tell him to stand up straight and be a man. By failing to take a leadership role, he was forcing her into a position she didn’t want to take, a position that is fundamentally unattractive to women. He was forcing her to be a guy, to play a guy’s role.

Now, I know what you want to say. Yes, a lot of times women will try to set something up for the two of you, or tell you places that they would like to visit. Don’t let this fool you, though – a woman will tell you this as a way of allowing you to abdicate some of your responsibility when it comes to dating, but that responsibility is still fundamentally yours. At all times you should have a plan and a firm direction that the night will take. The less input you have to ask from her, the more you will come across as a strong, confident, decisive man, and the more she will like you for it.

And make no mistake about it – she wants a strong, confident, decisive man. She craves it. By all means, if she wants to offer some input on what the two of you should do that evening take it, but don’t abdicate your leadership role without some genuine prompting from her first. Allow yourself to slip into the overly considerate habit of asking her what she wants to do and you will take on a less-than-sexy persona that will have her fantasizing of one day meeting a real guy.

All of this takes on much more importance in Asia than it does in the west, since the feminist movement still has to spread its legs here. Fail to take the leadership role in Asia, and she might wonder if there’s actually something wrong with you. Take on a strong leadership role, however, and you’ll spark the kind of attraction that she ultimately wants to feel.