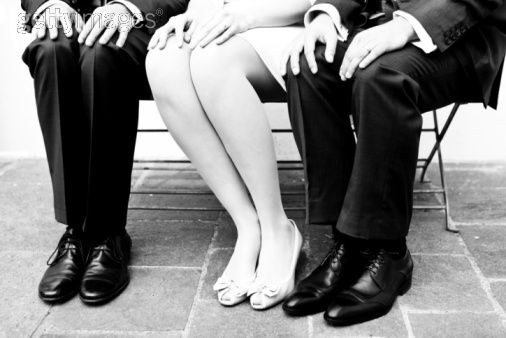 The Business of Relationships

Now, don’t get me wrong.  I’m not against monogamy.  I’m all for it in fact… I’m just against agreeing to monogamy.  There’s a great book, called, Mating in Captivity that captures a lot of the reasons that make monogamy such a challenge.

But not Everybody Sees it the Same Way

I had this exact same conversation with a girl of mine over text. Below are screen shots of our chat, and I’ll include some commentary along the way.

To set the scene… Earlier in the chat she sent me a picture of her and a friend and asked me if I thought the friend was cute.  I steered the comment in the direction of a 3-some, but she said that she wasn’t interested in sharing then flipped it, asking me if I’d be willing to share her with one of my guy friends. This is a typical response girls make when asked about having a threesome.  I said, that if she wanted to do it, I’d be willing to try it and that I want her to be happy.  She just accused me of being “weird”. 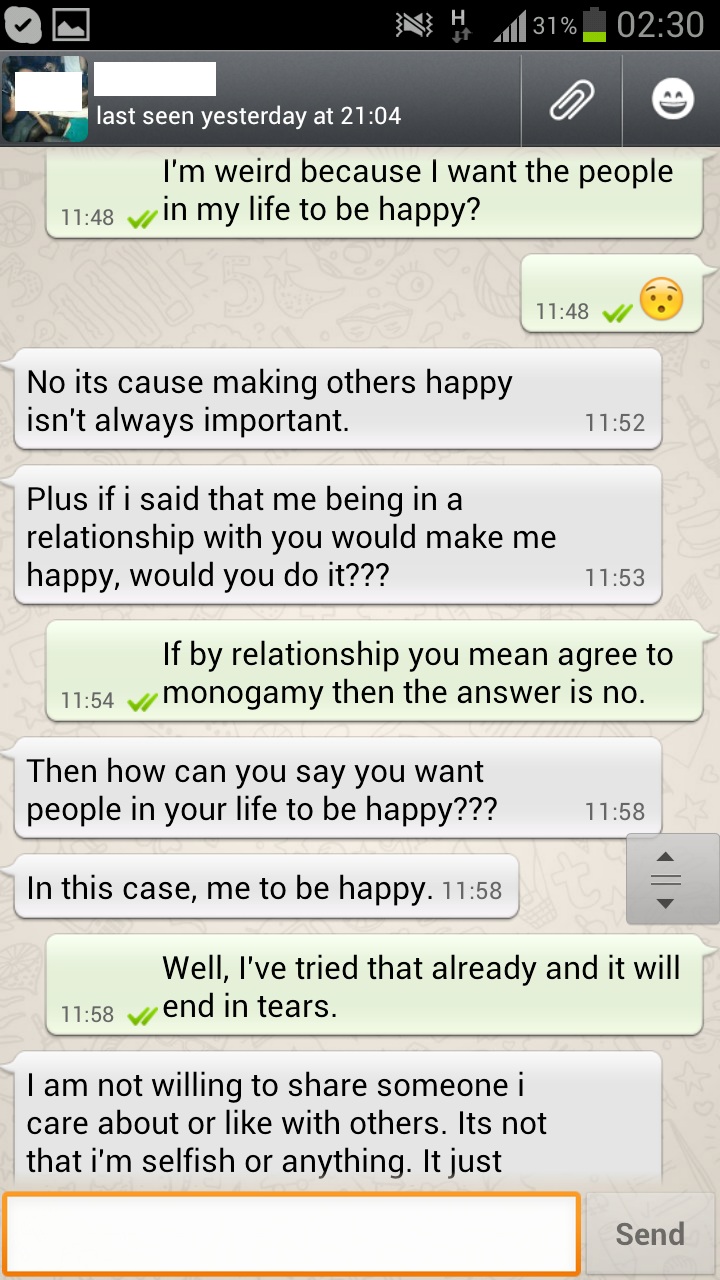 What is a Relationship?

For me, “relationship” is a broad term, so when girls tell me that they want to have a relationship with me, I point out that we already have a relationship.  This is really important because a lot of what determines whether things are going to work out with any particular girl or not are the expectations she has in place.  That goes for couples that are just dating, those who are married, those who are friends, and even for bosses and their employees.  Whenever expectations aren’t met, regardless of whether these expectations are stated or unstated, things can get ugly very, very quickly.  Socrates, covers this in his Christmas disaster post.

In the next chat message, I write, “I’ve tried that and it will end in tears.”  I hadn’t tried with this particular girl but I have been in exclusive, monogamous relationships in the past and, at this point in my life, I’m certainly not ready to give up having sex with other women for the rest of my life.  That means that, at some point, I’ll have to dump her, or cheat, or have a talk where I explain that I like and care about her but I really want to have sex with other women… None of these are very fun conversations, and they usually always end in tears. 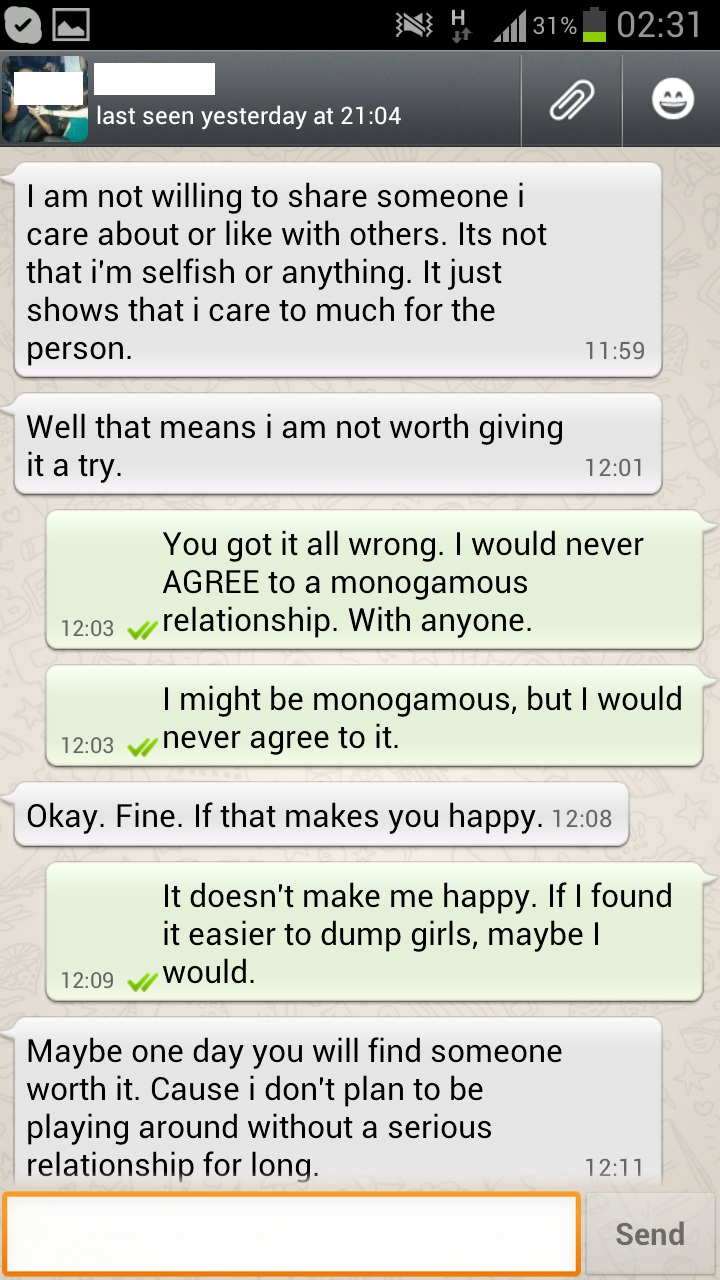 I really like the opening chat message from her here:

This is typical of how people think, but the reality is that if you’re not willing to share something, you are selfish, and it only shows that you care about yourself.  I’m not saying there’s anything wrong with being selfish and caring about yourself… in fact, I’m all for it.  I’m just saying that we shouldn’t kid ourselves about what’s really going on.

The next bit from her is also great:

Maybe this just seems like normal logic to you and if it does, it’s time for you to broaden your mind.  Let me repeat something from the previous section in different terms so that I can make it extra clear:

I’m 34 years old.  I plan to live until I’m at least 80, so that means another 46 years of life.  There are only two possibilities.  Either, we break up at some point in the future, or I’m with this girl until I die at 80 years of age never having had sex with another woman for 46 years.   Ummm… excuse me if agreeing to that makes me nervous.  I’m not willing to commit to 46 years of anything other than those things required to keep me alive, and even those, I slack on occasionally. 😉

Could that change…? Sure.  Is it likely to change with a girl I’ve known for only a few months?  I don’t think so.  Now, as I said before, I’m not against monogamy.  I’m just against agreeing to it.  What that means is that over the rest of my life, there will be periods of time when I will be monogamous.  I have been in the past – but not because I had to be… but because I just wasn’t interested in other women.  In the future, I imagine I’ll continue to feel the same.  Sometimes, I’ll be content to be with one woman, and at other times I won’t, even if I keep seeing the same girl for years.

The Consequences of Monogamous Relationships

I have one client who doesn’t mind agreeing to exclusive, monogamous relationships.  He also seems to have an easy time breaking up with girls.  In my experience, breaking up is always an emotionally draining, harrowing event that drags on for weeks.  I’d rather not go through it. The reason it’s such a harrowing event is because, once you establish your new relationship status, people get too comfortable.  When it ends, it’s similar to the shock that people experience when they’ve been working for the same company for 30 years only to be laid off.

They often can’t deal.  Contrast that to when I’m riding my motorcycle down the highway.  Motorcycles are dangerous.  There’s nothing between you and and the pavement but a pair of wheels that may not stay on the ground for very long.  Plus, you’re hurtling down the road at 100mph.  Every moment I’m on my motorcycle, I think about death because I realize that it could happen at any time.  Every time I pass a car, I wonder if the car doesn’t see me and is going to slam into me and crush me against the retaining wall.  That keeps me on my toes, to put it lightly.

It also means that I take nothing for granted, and enjoy every moment because I know it could be over in an instant.  Because it’s dangerous, I have to respect that danger, and I’m constantly monitoring and paying attention for anything that could be off.  I hear a slight rattling sound, and I need to make sure it’s not a wheel about to come off.  This level of vigilance in my non-exclusive, non-monogamous relationships is what keeps that relationship strong. The women I date know that they are being looked after better than anyone else. 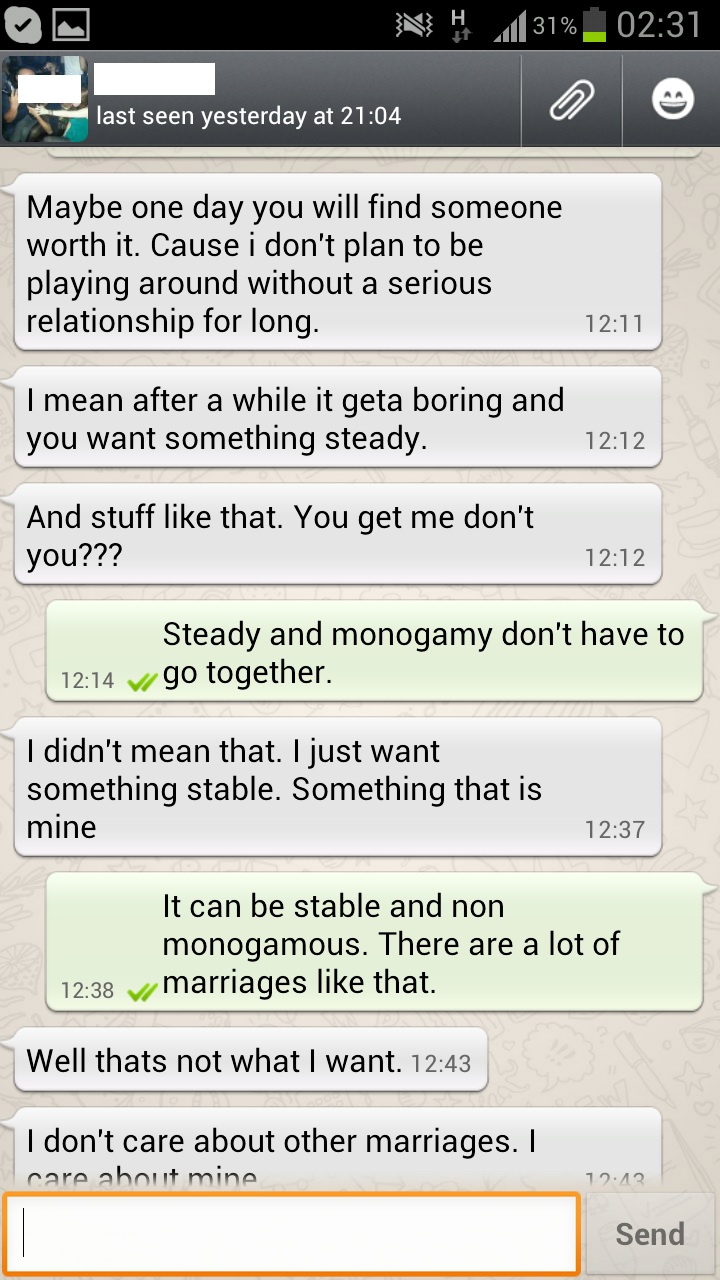 In the first sentence of the above chat there is the assumption that if someone was good enough, I’d be exclusive and monogamous with them.  I’ve already discussed that circumstance is the main determining factor when it comes to sexual satisfaction.  So, in this case, I want to point out that this girl really sets things up badly when she attaches her self worth to her partners sexual conduct. Any time you attach your self worth to someone else’s behavior towards you, you’re giving away your power and putting yourself in a victim role …and we all know that victims, get victimized.

Many of my clients make the same mistake on a regular basis.  They focus on what they’re not getting from a girl rather than focus on what they are getting.  Remember that attractive, desirable women, don’t need to give you any attention at all if they don’t want to.  There are plenty of other men right behind you who she could be giving her attention to, instead.  So, realize that everything she does give you, even if it’s not all that you want, is a victory.

A common misconception is that your dating options are:

No wonder everyone is so unhappy.  I don’t want to be someone’s “fuck buddy”, and I also don’t want to have a continuous stream of one night stands, so I can see why “something steady” (ie. exclusively monogamous) has so much appeal.  As the term “steady” implies, what people are really looking for in a relationship is stability.  I feel exactly the same way.

Where I differ is that I think the flexibility of a relationship means it will be more stable in the long run.  This is why friends can stay friends for decades so much more easily than romantic relationships.  Friends can come and go as they please.  When they can, they see each other often; if they move apart then they see each other less and if their situation changes again they’ll start spending more time together again.  The freedom puts less pressure on the relationship because the dynamic can shift and change according to circumstances – and that’s important because circumstances often change.

The fact that a girl I’m dating has the option at any time of seeing other men means that, every time she sees me, she’s making a choice to choose me over them.  She’s not going to suddenly wake up and realize she’s with the wrong guy.  She can never blame me for “wasting her time” with promises.  It keeps everyone mentally engaged, realizing that relationships are not a one time decision but a series of decisions over time.  For me, knowing that she’s consciously choosing me day after day, is the best stability there is. 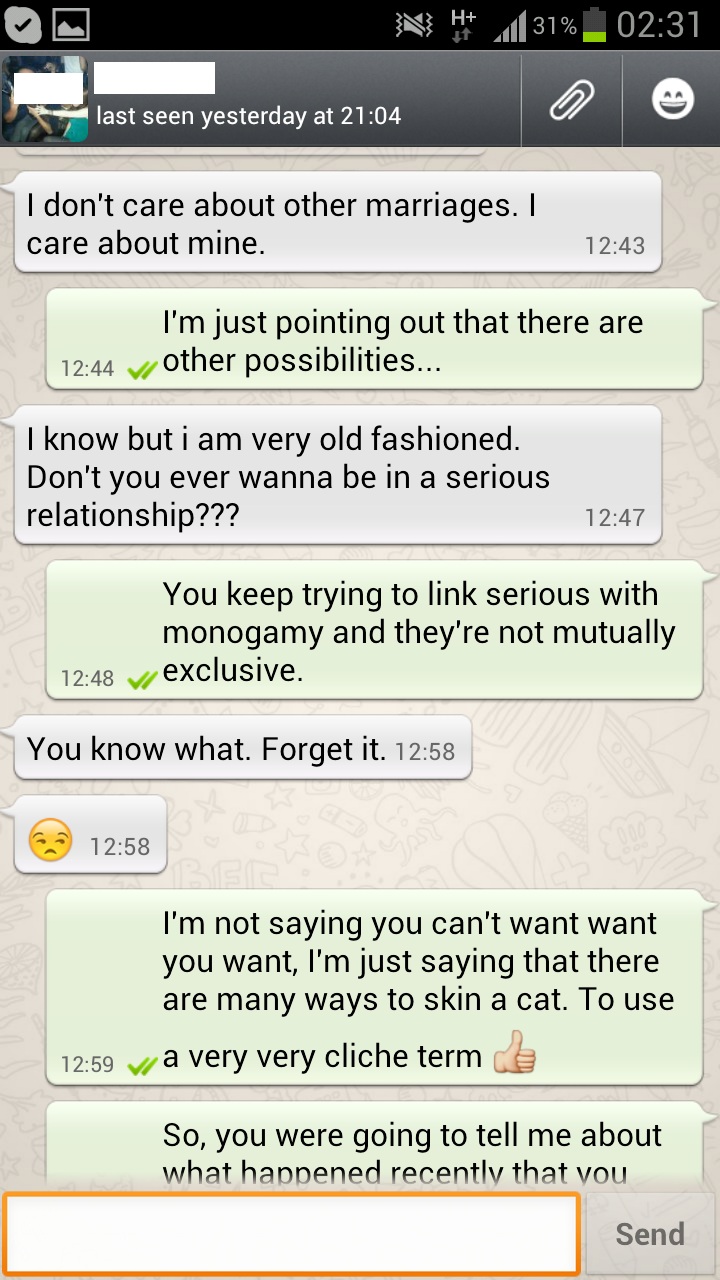 In the end, it’s very hard to influence people.  Even though she admits to understanding my point, she says she’s “old fashioned,” therefor unwilling to change her behavior.  Most people would rather not consider the possibility of changing.  Change is hard work and scary.  For me, because I went to an all boys school in Jr. High and High school, I was terrified of women when I got to University, but I was even more terrified of the isolation and loneliness I felt having no female options at all.

When the pain is great enough, or the reward delicious enough, then and only then do people change.  And believe me, that is what keeps me working so hard on my relationships.  None of the women I date want to be in an open relationship.  It’s not the first choice by a long shot.  My goal is to make being with me so wonderful – so delicious – that they’re willing to change.  Once again, I’m not saying that open relationships are the only option, or even the best option, for you. I’m just saying that you need to consider it as an option. In the end, you owe it to your self to check you’re own assumptions and make sure they’re giving you what you really want out of life.